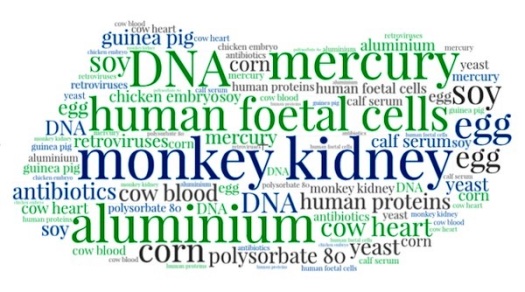 SAFER VACCINES ARE NOT THE SOLUTION: VACCINES WHERE NEVER PRODUCED TO FIGHT DISEASE. THEY ARE THE FRONT LINE OFFENSIVE WEAPON IN THE GLOBALIST CABAL EUGENICS/DEPOPULATION/TRANSHUMANIST AGENDA.

Vaccines were manufactured long after the disease that they were manufactured for were eradicated! There is the fairy tale about smallpox being eradicated by vaccines, the so called smallpox vaccine in fact, increased the death rate. What eradicated smallpox was better hygiene and proper sewage systems. The polio vaccine gives people polio, and is loaded with Simon monkey virus which infects genes with cancer that is passed on to other generations! The only way to end the epidemic of Autism, Auto immune disease, life long seizures, and Injury and death from these abominations that the Cabal label as Vaccines IS TO COMPLETELY  BAN THEM! Our bodies have a natural immune system that has been provided by our creator. If we eat organic foods, exercise moderately, and seek health care via Chiropractic, Naturopathic, and herbal means this Vaccine caused epidemic of illness will end. One day humanity will look upon Vaccines in the same way that we now look on leeches as a method of healing.

AND HERE IS THE PROOF!

Dr Judy Mikovits Jailed For Exposing deadly viral Neurotoxins in all vaccines. Molecular biologist Judy A. Mikovits, PhD, reveals the disturbing true story of how she was thrown in prison for blowing the whistle on deadly viral contamination of all human vaccines.

One thought on “The Vaccine Illusion Exposed, Vaccines Have Never Contributed To The Eradication Of Any Disease”